“U.S. multinational firms are the global grandmasters of tax avoidance schemes that deplete not just U.S. tax collection but the tax collection of most every large economy in the world.”

Said: Edward D. Kleinbard, a former corporate tax adviser to such companies who is now a law professor at the University of Southern California, as reported in The New York Times by Jesse Drucker and Simon Bowers. 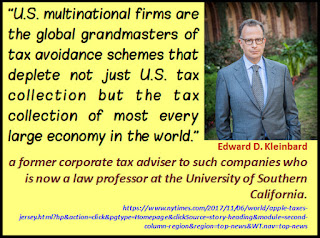 The report titled "After a Tax Crackdown, Apple Found a New Shelter for Its Profits" is based on the secret corporate records (Paradise Papers) from Appleby, a Bermuda-based law firm that caters to businesses and the wealthy elite.

"These documents reveal how big law firms help clients weave their way through the gaps between different countries’ tax rules. Appleby clients have transferred trademarks, patent rights and other valuable assets into offshore shell companies, avoiding billions of dollars in taxes. The rights to Nike’s Swoosh trademark, Uber’s taxi-hailing app, Allergan’s Botox patents and Facebook’s social media technology have all resided in shell companies that listed as their headquarters Appleby offices in Bermuda and Grand Cayman, the records show," says the article.

“U.S. multinational firms are the global grandmasters of tax avoidance schemes that deplete not just U.S. tax collection but the tax collection of most every large economy in the world.”

The above quote in the article comes from a lawyer Edward D. Kleinbard who, the article says, has worked as a corporate tax adviser to such companies in their tax avoidance management.

Isn't it interesting that this lawyer is now a law professor at the University of Southern California?

His profile page says: "Kleinbard received his JD from Yale Law School, and his MA in History and BA in Medieval and Renaissance Studies from Brown University. Kleinbard was for over 20 years a partner in the New York office of Cleary Gottlieb Steen & Hamilton LLP. "

You can watch Kleinbard deliver "Searching for our Fiscal Soul" at TEDX Livermore on Youtube.


Posted by Observer at 11:32 AM No comments: Links to this post

"Nothing sedates rationality like large doses of effortless money..."

Said: Warren Buffett, Berkshire Hathaway 2000 shareholder letter. When asked for his views on bitcoin several years ago on CNBC, he adviced: "Stay away from it. It's a mirage, basically."

During the interview published on 14 Mach, 2014 on CNBC, Buffet said the following about the cryptocurrency.

Read more »
Posted by Observer at 11:24 AM No comments: Links to this post

“Even though James is technically the C.E.O., he’s somewhere between can’t and won’t do anything that would cause changes to Fox News. This is a tricky divide.”

Said: Brian Wieser, a Senior Analyst - Advertising/Media/Internet with Pivotal Research, reported in nytimes in an article “For Murdoch Empire, Perhaps a Decisive Point in Relationship to Trump,” by Emily Steel.

The article presents an analysis of James Murdoch’s personal email message to his friends denouncing racism, anti-Semitism, white supremacy and neo-Nazis. James also used some tough words for the president criticising him for his response to the violence in Charlottesville, Va. Trump's response - sympathetic to white supremacists and neo-Nazis has created a worst crisis for him at the already shaky White House. 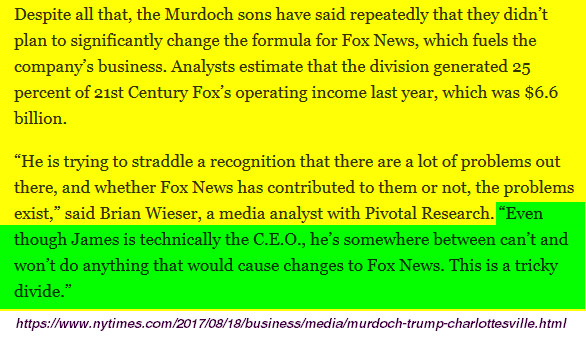 Analysts are trying to assess the possibility of any impact James' letter may have on the reporting formula of Fox News for Mr. Trump.

Posted by Observer at 12:14 PM No comments: Links to this post