Whoever said money can’t buy happiness has never been inside an apartment 1,300 feet above a bustling metropolis (New York)

The Appraisal covered New York’s tallest residential building, 432 Park Avenue, which attained its full height of 1,396 feet on Oct. 10. The 104-unit condominium tower of 96 stories, between 56th and 57th Streets, opens next year and the penthouse views, in all directions, are spectacular, as per Chaban's Appraisal.

The total cost of building developed with Los Angeles based CIM Group - a premier full service urban real estate and infrastructure fund manager - is reported to be $1.3 billion. According to the Appraisal, more than half of the 104 condos have already been sold, including the $95 million penthouse and the cheapest units starting at $7 million.

"If Manhattan has truly become a playground for the rich, here is its new beacon," Chaban concludes.
Posted by Observer at 11:15 PM No comments:

India is not sufficiently strong in politics, economy and security to be a major player in the American team for "rebalancing Asia-Pacific"

Said : Su Xiaohui, deputy director of the Department for International and Strategic Studies at China Institute of International Studies, a research institute run by China’s Ministry of Foreign Affairs, in an editorial titled : "India will not be a major player in America's game of 'rebalancing the Asia-Pacific' published in People's Daily, the official mouthpiece of the Communist Party. 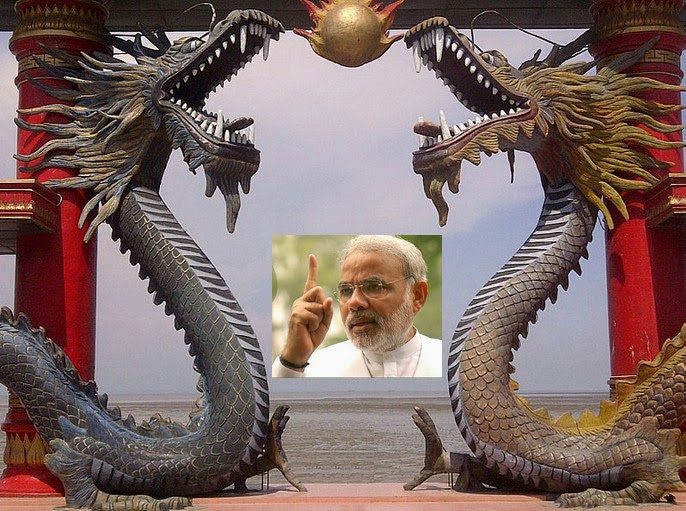 The editorial has underplayed the media reports saying that "India has a vital role to play in the U.S. strategy of 'rebalancing Asia-Pacific'". It rules out the possibility that the U.S. will rely on India to counter China, a view expressed by Indo-US policy watchers. The editorial goes to the extent of almost challenging the capacity of India to play such a key role in Obama's scheme of things. It says : "In fact, no matter how close the relationship between India and the U.S. grows, India will not be a major player on the American team. The 'rebalancing' strategy consists of three parts - politics, economy and security. However, Indian national power is not sufficiently strong in any one of the three aspects."

The editorial makes note of President Barack Obama playing host to a rare private dinner for Modi at the White House to "promote a personal relationship with Modi" hinting it to be a reward for India for showing enthusiasm and willingness to start a "new chapter" in a strategic partnership with the US.
The editorial tries to convey that India does not figure in the priority list of the U.S. bilateral relationship or for rebalancing strategy. It says : "The key element of the U.S. rebalance strategy is The Trans-Pacific Partnership (TPP). The U.S. is attempting to establish free trade zones in the Asia-Pacific with the help of TPP. However, India has not been invited to participate in the negotiation process." Another aspect highlighted by the editorial is related with Indo-US cooperation in defense. According to it the American interest is limited to ammunition supply and developing the military forces.

In an attempt to remind India its commitment to Non-Aligned Movement, the editorial says : "Fundamentally, India was one of the countries behind the Non-Aligned Movement. Every Indian government has emphasized that non-alignment is a basic principle of their foreign policy. India adheres to an all-round foreign policy strategy. Not only does India give priority to the India-U.S. relationship, it also attaches great importance to Sino-India relationships."

The border issue with India has also found a place in the editorial which shows that PM Modi's US visit has been able to contain the dragon for now. "The unsolved territorial disputes will not affect the development of Sino-India relations. China and India vowed to forge a closer development partnership when Chinese President Xi Jinping finished his state visit to India a week ago." Today's reports indicate that Chinese forces have withdrawn from the encroached land.

The editorial's tone becomes little softer towards the end, when in conclusion it says : "It is unrealistic for America to rely on India to play a leading role in its "rebalance in Asia-Pacific" strategy. There is little prospect of India and the U.S. reaching consensus on Chinese issues."
As widely expected, Prime Minister Narendra Modi's US visit has generated the required heat and attention in China that is necessary for India to be taken seriously. India is the only country that can effectively keep in check China's growing global ambitions and illegal activities in the South China Sea defying the vast majority of world community, of course jointly with the US.

The US-India partnership will prove to be an unbeatable challenge for China which it knows very well. It's a fact China can ill afford to ignore especially when Narendra Modi is at the helm of affairs in India. China's wealth could be a big asset and force for the Chinese but that cannot make up for loneliness it faces on the global stage.
Posted by Observer at 8:13 PM No comments: