Beijing is masking the greatest health emergency in a century and the cost of this deceit is global: Thomas Georg John Tugendhat

Tory MP Tom Tugendhat said: 'Beijing is masking the greatest health emergency in a century and the cost of this deceit is global,' the Daily Mail, UK reports.

The report further says there is growing pressure for Britain to lead the way in urging China to reform its record on animal rights. A senior Minister said: 'We have always known their wildlife markets are a recipe for a pandemic. China needs to close these down immediately. If they don't, they will rightly become a pariah state.'

China also contributed to the shortage of personal protective equipment (PPE) desperately needed by Britain's doctors, nurses and other health professionals. At the height of the epidemic in Wuhan and surrounding Hubei province, Chinese leaders commandeered vast amounts of PPE, made in factories across China and destined for export.

UK safety equipment firm JSP had its two factories in China 'requisitioned by the government to make disposable RPE [respiratory protection equipment] for Chinese government agencies', according to a letter its chief executive Mark Johnstone sent to customers on February 3.

In addition, Chinese state-backed operatives working abroad were directed to bulk-buy medical supplies from Western countries. Overseas offices of Greenland Group, a property firm backed by the Chinese government, bought three million masks, 700,000 hazmat suits and 500,000 pairs of gloves as it 'felt compelled… to assist in efforts to mitigate the spread of the virus, which had caused a shortage of crucial medical supplies in China,' according to a company newsletter seen by the Sydney Morning Herald.

Ironically – and for critics, cynically – China has now started to donate masks and other equipment to other countries. Bank of China has sent 200,000 PPE items to Ireland and Chinese tycoon Jack Ma has given test kit, masks and other supplies to 54 African nations.


Tory MP Tom Tugendhat said: 'Beijing is masking the greatest health emergency in a century and the cost of this deceit is global.'
Posted by Observer at 6:28 PM No comments: Links to this post

Said David Frum, a senior editor at the Atlantic, in his post titled "The President Is a Crook" today.

Frum concludes writing this: "Trump’s whole philosophy of life is of a kill-or-be-killed competition. It’s an old question: Is Trump an authoritarian, or a crook? The answer is shaping up. Trump must be an authoritarian precisely because he is a crook. The country can have the rule of law, or it can keep the Trump presidency. Facing that choice, who doubts what Trump’s answer, or the answer of his supporters, will be?"

Posted by Observer at 5:21 PM No comments: Links to this post

‘They have dollars, we have God’

Said: Turkish President Recep Tayyip Erdogan calling on his people to trust God during a rallying call to supporters in the Black Sea province of Rize on August 10. He said, "Today we are better than yesterday, tomorrow we will be better than today. You do not need to worry at all. Various manipulations were running. You shouldn't pay attention to those manipulations. Don't forget that, if they have their dollars we do have our people, we do have our God."

Erdogan was pointing in Washington’s direction when he said “they have dollars, we have God.”

Politico, in its July 14 post titled "Europe watches as Turkey burns" has indicated that Turkey's current crisis is the result of years of loose fiscal and monetary policies and is almost entirely of Erdoğan’s own making.

Another observation made in this article points out that "a big part of what makes the situation so dangerous for Turkey is that Erdoğan is the only one with the power to fix things. He is unlikely to do so in the near term."


Instead of pursuing a compromise in his standoff with the Trump administration over Turkey’s imprisonment of an American pastor, Erdoğan is digging in his heels, signalling this week that he’s prepared for “war.” On Tuesday he said Turks would boycott iPhones and other American electronics. He also lashed out at domestic critics of Turkey, calling them “traitors” and “economic terrorists.” (Politico)

Erdoğan has already announced ‘boycott’ of American electronics, according to the latest reports.

Read the full article of Politico here.
Posted by Observer at 11:41 AM No comments: Links to this post

“I’m a low-key understated guy but that should not be mistaken for what my spine is made of - so I’ll just leave it at that."

Said FBI Director Christopher Wray when asked if he’d threatened to quit his post at any point, in a question-and-answer session at the Aspen Security Forum in Colorado, reported Bloomberg.

Here are the highlights of what else Director Wray opined:
Asked if he’d threatened to quit his post at any point, Wray said, “I’m a low-key understated guy but that should not be mistaken for what my spine is made of -- so I’ll just leave it at that."

Also the video of the event below.


Posted by Observer at 6:45 PM No comments: Links to this post 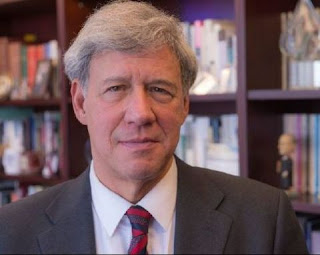 Said Prof. Geoffrey Stone of the University of Chicago Law School as per an article titled "Trump-Putin summit mystery: What about Snowden?" written by Stephanie Murray in today's Politico.

Murray notes that as a candidate, Trump “guarantee[d]” he would bring home the infamous National Security Agency whistleblower. But as president, however, he has shown no desire to bring Snowden back. Murray in his article writes "some experts think handing over Snowden would be an easy way for Putin to do Trump a favor — giving the president a victory that would especially please intelligence and national security officials angry he hasn’t done more to counter Russian election meddling. Before Trump was sworn in in January 2017, former Deputy CIA Director Michael Morell wrote that handing over Edward Snowden would be “the perfect inauguration gift” from Putin to Trump."
“If Trump wants this as a victory then I don’t see why Putin wouldn’t give it to him. If Putin wants to either do a favor for Trump or make Trump look good, and if Trump wants this, it would be an easy thing for Putin to do. You can almost see the picture of Snowden in handcuffs being dragged into Air Force One,” Prof. Stone is reported saying.

Read the full article here.
Posted by Observer at 12:03 AM No comments: Links to this post

"Capitalism is not a game where the person who dies with the most money wins. Wealth is deferred consumption, and if you die without spending your money or giving it away, then you’ve deferred that consumption a bit too much."

Said: Felix Salmon, a regular Slate contributor and host of the Slate Money podcast, in his July 8, 2018 piece "Takeaway From the New Billionaires Ranking: Zuckerberg and Bezos Don’t Give Away Enough Money" in slate.com.

Felix explains how and why 'Mark Zuckerberg Tops Warren Buffett' in the Bloomberg’s list of world’s-richest people. In the same way how Amazon's Jeff Bezos has now become richer than Bill Gates. The difference in the net worth is the result of the fact that Bill Gates and Warren Buffet are also in "the competition to give away the most money in service of making the world a better place."

Bill Gates has donated more than 700 million shares of Microsoft since 1994 and Warren Buffett some 290 million Berkshire Hathaway B-shares since 2006 for the charity work being done throughout the world. Felix writes that if they’d simply held on to those shares instead, Bill Gates today would be some $71 billion richer having a net worth of $165 billion, making him comfortably the world’s richest man. Similarly, Warren Buffett would have about $54 billion extra to his current net worth of $81.2 billion, and he would be worth roughly $135 billion today. That’s way more than Zuckerberg.

It’s to their credit that Bill Gates and Warren Buffett aren’t in the world’s-richest-man competition, and both are quite happy to be overtaken in the richest-man stakes by others.

"The important thing to remember is that capitalism is not a game where the person who dies with the most money wins. Wealth is deferred consumption, and if you die without spending your money or giving it away, then, assuming you’re not interested in starting a dynasty, you’ve deferred that consumption a bit too much. If Gates wanted to play the wealth-maximization game, then he would still be the world’s richest person by a comfortable margin. It’s to his credit that he isn’t playing that game, and it’s to Buffett’s credit that he’s happy to be overtaken in the richest-man stakes by Zuckerberg," Felix observes.


Read the full article here.
Posted by Observer at 1:01 PM No comments: Links to this post

"In Silicon Valley, after all, math is less important than intangibles like vision. And when $1 billion can become $1.5 billion, or even $2 billion, in a manner of weeks, you’ve entered a world of abstraction". 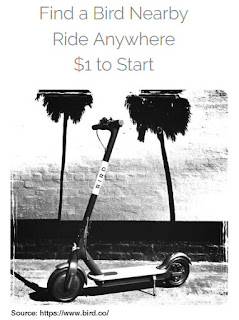 Said: Maya Kosoff in her column titled "[“I Want No Part In It”: The Hysterical Debate Over Silicon Valley’s Next Big Thing"] in Vanity Fair of June 14. Her comment was based on the astronomical rise in the valuation of Bird, the electric-scooter start-up, from $300 million in March this year to $1 billion at the end of May and now the startup is seeking a fresh round of $200 million funding at $2 billion valuation - double the valuation in less than one month!

Maya beautifully illustrates the arguments for and against the scooter culture that is gripping the Metros like San Francisco and Los Angeles where the sudden preponderance of Bird scooters has created a cottage industry of people who collect and charge Bird scooters, known as “Bird hunters.”

True believers see things differently. “It’s been [over] a decade” since the Segway, another scooter-start-up investor told me of the inevitable comparison. “Plenty of things didn’t work a decade ago that work now, due to cultural shifts.” Car- and bike-sharing services have already inaugurated a new way of thinking about public and private transportation, acclimating consumers to the idea that they don’t need their own vehicles to get around. Kevin Roose, reporting for The New York Times, grudgingly admitted that electric scooters, while “kind of dorky,” are also weirdly useful, under the right circumstances. “I wanted to hate the scooters. I really did,” he wrote, before traveling to Los Angeles for work. “Tech hubris on wheels - what’s not to loathe?” Instead, he fell in love. The scooters are ubiquitous, easily discovered and unlocked via smartphone app, and driving is simple: a throttle controls the speed, which tops out at a breezy 15 miles per hour, and a hand brake brings you to a smooth stop. When you arrive at your destination, you leave the scooter wherever you like and lock it with the app.

Indeed, the vigor expressed by Bird enthusiasts may be matched only by the company’s detractors, who have condemned the scooters as a plague, a nuisance, and even an existential danger. “It’s wheelmageddon,” one San Francisco resident told me in April. “They are everywhere . . . People are zooming past pedestrians without a single fuck to give.”

You can also watch below how this new breed of electric scooters is invading San Francisco (Courtesy: Engadget):

Posted by Observer at 8:15 AM No comments: Links to this post